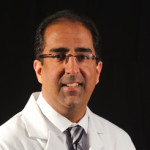 Dr. Sharma received his B.A. from Rutgers College in 1994. In college, he graduated with honors, was elected to Phi Beta Kappa and was awarded the prestigious title of Henry Rutgers Scholar. He then attended UMDNJ- Robert Wood Johnson Medical School in New Jersey. In 1998, he came to Philadelphia to do his residency in Internal Medicine and fellowship in Gastroenterology at Thomas Jefferson University Hospital. As a fellow he was awarded the coveted Komarov Prize, awarded to one fellow annually in the Philadelphia area for outstanding research. Dr. Sharma has published articles on peptic ulcer disease.