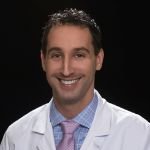 Dr. Frankel was born and raised in the Philadelphia area and attended high school at Akiba Hebrew Academy. He received his Bachelor of Arts degree at Colgate University in upstate New York followed by his Medical Degree at Sidney Kimmel Medical College (formerly Jefferson Medical College.) He went on to complete internal medicine residency at Thomas Jefferson University Hospital before pursing his gastroenterology fellowship at Yale-New Haven Hospital. There he developed a strong interest in Inflammatory Bowel Disease (Crohn’s and Ulcerative Colitis) and was awarded a visiting fellowship from the Crohn’s and Colitis foundation to receive additional training at the University of Pittsburgh Medical Center. Dr. Frankel was nominated by his peers to serve as a chief fellow and completed his gastroenterology fellowship in 2017.

Dr. Frankel is a member of the American College of Gastroenterology as well as the national and local chapter of the Crohn’s and Colitis Foundation