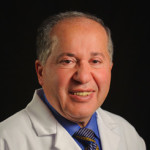 Dr. Khoury was born in Beirut, Lebanon. He graduated from LaSalle College with honors and went to St. Joseph’s Jesuit Medical School in Beirut. He completed his residency in Internal Medicine at Lankenau Hospital and remained there for a fellowship in gastroenterology. After his fellowship, he spent four years at Presbyterian Hospital as an instructor in gastroenterology supervising the GI fellows. He began his private practice in gastroenterology in 1980 in Drexel Hill.

Dr. Khoury is fluent in several languages including English, French, Arabic and Armenian. He is married and has three daughters.